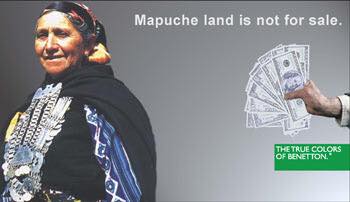 “Claim of responsibility for sabotage of two Benetton shops

We are enemies of power and domination. We want the end of every form of exploitation. We aim for the absolute destruction of authority and of the capitalist system. The symbols and the consequences of capitalism and exploitation are everywhere. So we just had to take a clear decision, choosing to take the side of those who are oppressed and attacking the system and its accomplices: direct action for self-determination and total liberation! It doesn’t matter how small is the action compared with the giant monsters we are fighting: it’s action and not just promises at election time, it is the proof of the fact that the fight isn’t over.

On Monday, January 29th, from an anarchist, antispeciesist, antiauthoritarian and anti-capitalist position, we sabotaged two Benetton shops located in Ferrara (Italy) by gluing the locks of the shops.

In solidarity with the Mapuches who, in Patagonia, for decades have been resisting the oppression of the corporation that, since 1991, had taken away (creating many ecological and social problems) almost one million hectares of land from the Mapuches who had lived there for centuries, in harmony with Pachamama (Mother Earth).

For the animals who are enslaved and exploited for the production of wool (to make clothes), and meat (the business of Benetton Group is not limited to the fashion industry).

For the workers, children and adults, who are exploited in factories through a particular method of subcontracting.

In memory of the victims of Rana Plaza collapse, in Bangladesh; and in memory of Santiago Maldonado, Rafael Nahuel and all the activists who lost their lives because of the brutal repression put in place by the States of Argentina and Cile.

And also not to forget the involvement of Benetton in the transport of British war material to Iraq, and the hypocrisy of advertising campaigns hidden behind fake social commitment, created by Oliviero Toscani, in the attempt to show a clean image of the corporation.

FOR HUMAN, ANIMAL AND EARTH LIBERATION