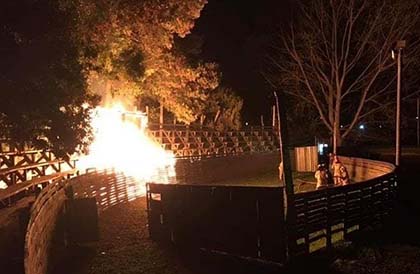 On September 17, a rodeo ring in La Ligua (Valparaíso) was heavily damaged by fire. According to media reports, leaflets were found at the site, including one that said, “See how your tradition burns. Justice for animals” It was the third attack this month against Chilean rodeo.

In the early hours of September 14, a rodeo ring in Paredones (O’Higgins) was set on fire.

Early on September 7, a rodeo ring in Curacaví was damaged by fire. Firefighters found leaflets against the rodeo at the site.